This Guide is written specifically by and for computer scientists and engineers. The underlying biology in cancer genomics can be exceedingly complex and requires years of study. Making the content palatable requires drawing abstractions around these concepts. This guide should be treated as an introduction to the domain that teaches our audience the material in a "broad-strokes" fashion. Please be forgiving if you feel we have glossed over your favorite quirk of cancer genomics. Further, everything within the guide is presented within a research context and may not be relied on in making decisions about patients. If you feel anything has been stated incorrectly, you can file an issue on the Github repository. Please see the LICENSE.md for more information.

Everything in this guide refers to eukaryotic molecular biology, which is the study of organisms whose DNA is enclosed within a nucleus. Broadly speaking, most familiar species are eukaryotes, except bacteria which has DNA spread throughout the cell. At times, this document will be geared towards the sequencing of human cells specifically.

Cells are the smallest unit of life and are the building blocks of organisms, from a single-celled bacteria to the trillions of cells that make up the human body. Cells are complicated organized structures that take a variety of forms, forming tissues and organs and completing the body's functions.

Within nearly every cell is a genome. A genome is the complete inherited instruction set for producing, operating and maintaining a living cell or organism. This information is physically encoded in a molecule called deoxyribonucleic acid or DNA. Among other things, DNA contains instructions for the assembly of tens of thousands of different molecular products. These instructions (or recipes) are called genes, and the physical, molecular products genes encode for are called proteins. Cells are constantly reading and interpreting genes stored within the DNA in order to assemble various proteins. Each cell type in the body produces a complex ecosystem of proteins that keep the cell alive and executing its specific function.

To illustrate this phenomenon, imagine the cell as a bakery that makes many different types of cakes. In this analogy, the genome stored within the DNA is the master recipe book containing more than 20,000 different cake recipes (genes). The physical cakes that are made from these recipes are the proteins. Notably, there are a limited number of copies of the recipe/gene (two copies in the normal case for humans), but you may make thousands or more physical cakes from those recipes. Depending on the type of cell, the mixture of different cake flavors, their quantities, and how they interact together will be different.

Keep an eye on this analogy—we will refer back to and build upon it a number of times during the course of this guide.

A Mental Model for DNA​

Conceptually, you can think of DNA laid end-to-end as a ~3 billion character long string consisting only of 'A's, 'C's, 'T's and 'G's. This string and any substring contained within are commonly referred to as genomic sequences. These characters represent the physical Adenine, Guanine, Thymine, and Cytosine bases (or nucleotides) respectively.

Importantly, though it's easy to conceptualize DNA as a single, very long string, the reality is more complex. DNA is comprised of two complementary sequences known as strands. Each base is actually a member of a base pairs, whereby nucleotides complement each other uniquely—'A's pair only with 'T's, and 'G's only with 'C's. Up close, this structure resembles a spiral staircase as seen in the figure below. 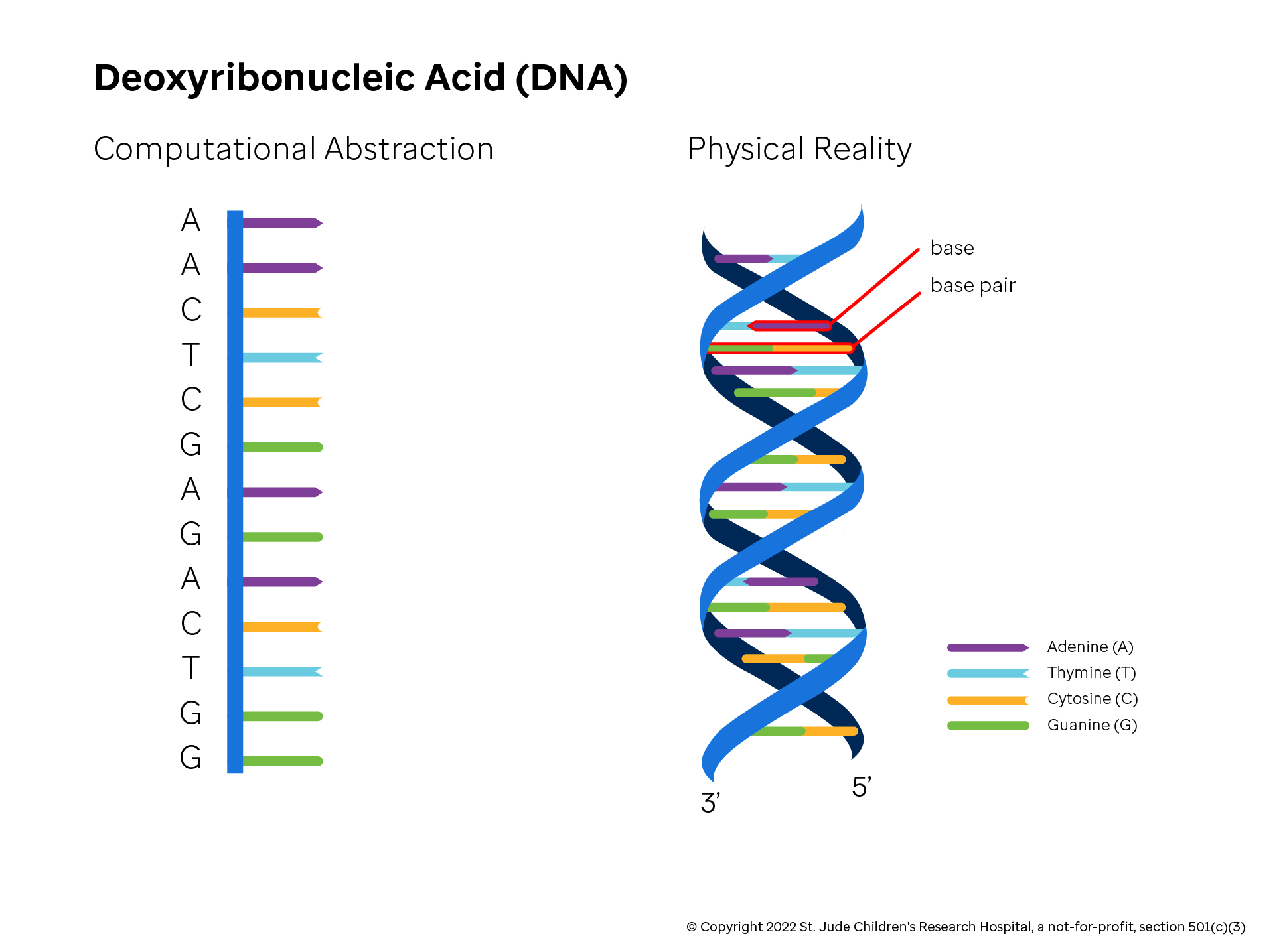 When cells divide, the spiral unwinds; each base pair is split; and the molecule is split into two strands, each one containing the information needed to replicate the original DNA structure. Normal healthy cells then copy the genetic code very accurately, rarely introducing variation.

In plants and animals, DNA is broken up into a number of large sequences called chromosomes that are tucked into the nucleus. Chromosomes typically come in pairs (one from your father and one from your mother) and are wrapped around proteins called histones. These histones keep the DNA string tightly packaged and help control which gene products are made in a given cell. For humans, there are normally 22 pairs of autosomes (chromosomes shared by both sexes) and a pair of sex chromosomes (XX for females or XY for males), totaling 23 pairs of chromosomes. Autosomes are numbered from 1 to 22 based on size, arranged from largest to smallest. The full set of chromosomes makes up the genome.

The genome is a vast search space for biological questions. Each genome is a biochemical database that, if properly accessed, can inform how our bodies function. Genomes account for the natural differences between individuals, define family traits, and distinguish how cells in tissues and organs vary. When genomes acquire adverse mutation(s), cancer as well as other genetic diseases can occur. By examining the relationship between physical traits (e.g. blood pressure or the development of a tumor) and the genome, known as genotype-phenotype relationships, clinicians can develop personalized medical treatment based on an individual's genetic makeup.